If you’re not a member, for search marketing’s sake, sign up!

Google+ hits another milestone by crossing 500 million+ total users and 135 million active users. In September, Google+ reported about 400 million total users. Google predicted the network had the potential to reach around 450-500 million users by the end of the 2012 year and they were indeed correct! 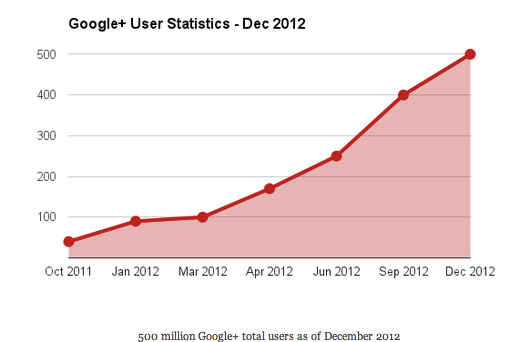 Google+ has reached, and surpassed, the growth of Facebook exponentially! (as of June 2011). This growth rate is significant since Facebook didn’t pass 60 million members until nearly four years after its debut. At the time, company executives were expecting Google+ would reach about 400 million users by the end of 2012. Now they have exceeded their expectations as both personal and professional interest in Google+ are on the rise. Not only is this platform being used by individuals for social purposes, but companies are taking advantage of Google+ for seo business optimization.

During an earnings call, company executives will be as positive as possible about the growth of google and its products, especially Google+. One thing to note though is that the only people who have aggressively compared Google+ to Facebook are members of the press. Since its launch, Google has never once inferred that Google+ was a social networking site that relied on a standalone web product. In fact, unlike Facebook, Google’s platform has offered a boost for companies’ seo business optimization from the very beginning. When it comes to marketing priorities like social networking, branding yourself online and developing SEO, Google+ is the perfect central hub for accomplishing these goals.

Google+ launched as beta in June 2011, and despite a slow start has accelerated well beyond the growth of Facebook, Twitter or MySpace combined! We wish more success in months and years to come! Congratulations Google+. Well played!

My “crackpot” prediction: Google+ and Facebook will become allies and we will see the largest social network platform emerge…called “Googlebook”!

(Video) Are You Making These Top 5 Marketing Mistakes