The tablet is a new form of technology that has been increasing in popularity and functionality over the past several years. Tablet technology that is continually evolving and changing. Companies are now attempting to produce their own unique version of this hybrid device or to improve on the product they already have available. With the growing popularity of tablets, new companies are taking their turn at developing more user-friendly hardware and improving the available technology. Research has shown that as smartphone use grows, so does tablet use.

Tablet ownership is up over 280%, according to a recent study by GlobalWebIndex.

With the demand and market for tablets gaining ground over desktop computers, new tablet prototypes are in the making.

New Tablet Technology from the UK 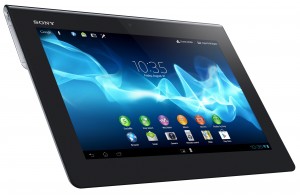 Intel Labs, Plastic Logic, and researchers from Queen’s University have designed new tablet technology that is actually similar to paper in texture and feel! A flexible tablet, the PaperTab is created to help users rethink the way they use tablets. The goal was to make the PaperTab experience more like using actual pieces of paper. Everyone has several pieces (stacks even) of paper on their desk. PaperTab is supposed to mimic what shuffling these papers would be like on a tablet instead of on your desk.

The PaperTab is designed to be used in groups up of up to 10. Each app that is open can have its own PaperTab and the user is able to work across several screens at once, move things between them, or accomplish several tasks simultaneously.

How It Actually Works

Instead of buttons or swiping, users actually bend or flex the PaperTab itself. The screen responds depending on the movement. If you flex the right side of the display, it will page forward. If you bend the left side, it will page backward. The flexibility of the tablet adds to its uniqueness and appeal, but is also the main functional element.

According to users, the PaperTab creates a unique workflow. It has been related to taking various tabs on your desktop and transferring them into physical tabs on your desk. But with the PaperTab, you retain the ability to be able to move information around between tabs. You can also place PaperTabs together to create one big screen. Once users get the hang of the flexible tablet, it would seem the possibilities are endless when working with multiple documents, apps, or programs.

The only drawback seems to be the bulky cords connected to the PaperTab. Hopefully they can be replaced with an inner battery or some other sort of power source. Though the PaperTab may seem awkward to use at first, it is easier to pick up pieces of paper right in front of you (as the PaperTab simulates) than to backtrack or close out windows on a desktop or traditional tablet. In the future and as new tablet technology evolves, maybe all tablets will have the look and feel of real paper.

A Review of Leap Motion: A New Touchless Technology